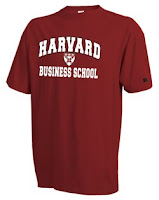 Well not everyone had the same answers as me (see comments in post below)... but some were close. To solve this riddle, we need to start with what we know about the boys.

Luke hoards money and is frequently making deals to get more money. He thinks he should be paid for getting out of bed in the morning. He will go to the store to buy a $30 item, and will leverage parental equity to pay for the sales taxes. He also is giving and has been known to give money to parents, grandparents, and brothers. B-School for Luke.

Caleb... Legos... Legos... Legos... Never concerned too much about money. Likes to read intricate Lego procedures in his spare time. A little eccentric and not concerned about what he wears. Focused on the task at hand (when it's something he wants to do). Strong in science in school - to heck with everything else. Likes to help people. Med School for Caleb.

Seth... Could do anything, I think, but there is a sense of justice and logic to him. Having two younger brothers who tend to cause him some issues on occasion, Seth has to argue his position often, and is usually pretty calm and level-headed. Often is able to identify how brothers have wronged him in some way, and convincingly proclaims his innocence in the matter. Law School for Seth.

Of course, I would not be disappointed if I have all this wrong. All of these are tough fields of study followed by time-consuming careers. I just want each of them discover God's will on their own, and to make the best of their lives by living that out.

So where's the engineer and jewelry designer in the family? I guess that is Dad and Mom! And I'm still thinking about opening that hot dog stand in the shallow waters of the Keys in Florida.
Posted by Blain Dillard at 5:27 PM 1 comment: 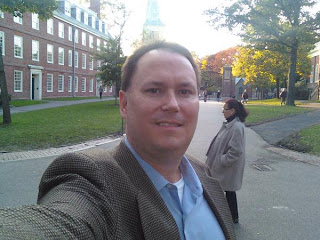 This week I am at the subject class in Boston. Today we got done a little early so I got over to the main campus - pictured here at Harvard Yard. This is a great experience, the likes of which I hope someday my boys can receive. Tonight, however, I have a lot of homework!While at Harvard, I went to their "Harvard Coop" store which is where they have a bazillion shirts and other logo merchandise. I accomplished my mission buying shirts for my boys. Since I don't "really" go to Harvard, I guess it would be pretentious for me to wear their brand, especially since they are certainly not known for their sports teams. However, buying shirts for the kids allows me to live vicariously through them, as well as encourage them to strive for making the grades to go to such an extravagantly expensive, but distinguished, school. I guess every parent wants their kids to accomplish more than they did, so I guess I'm settling into that mode myself. So while I would shudder to think about paying for that sort of college for 1 to 3 children, I would try to find a way if that challenge ever presented itself.

So I bought 3 shirts... one was Harvard Business School, one was Harvard Law School, and the other Harvard Medical School - each one carefully selected to fit the personality of one of our boys, though perhaps not their bodies due to the lack of child sizes. So for those who know Seth, Caleb, and Luke: Who gets which shirt? Post a comment here with your guess (and why), and I'll answer later with my choices.
Posted by Blain Dillard at 5:48 PM 3 comments: