The "Game" of LIFE

One of this year's hot Christmas gifts was "The Game of LIFE Twists & Turns". I don't remember playing the original game much as a child, but we've sure played this one a lot in the last 5 days.

For anyone not familiar with the game, players earn LIFE Points and dollars (which are converted to LIFE Points at the end of the game) by experiencing careers, lotteries, job 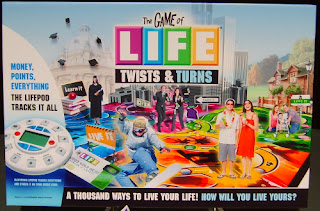 promotions, marriage, kids, cars, houses, vacations, education, and, of course, catching lucky breaks by leveraging your grandmother's cookie recipe for big bucks. The game is divided into quadrants of play called Learn It, Earn It, Live It, and Love It. This new LIFE game even takes VISA! Just what I was hoping to teach my kids at the ages of 4, 6, and 9! At the beginning of the game you determine how many years (turns) you will play, and then once you're done, the one with the most LIFE Points wins.

The first time I played, I severely lost to both Caleb (6) and Seth (9). Seth refused to buy a house or car or take any risk whatsoever. Caleb took the maximum risk at all turns and it paid off every time for him. Having never played the game before, nor having experienced much of "real" life, Caleb won that first game. I made the mistake of getting an education before going off to work. I also steered clear of marriage and kids, trying instead to maximize my earnings in the 10 years we had decided to play. I lost subsequent games with a similar strategy. That $500,000 island I had to buy really sunk me in one game.

Upon reading the detailed rules mid-week, I formulated a new strategy for winning. It turns out that getting married earns a lot of LIFE Points that continue to accumulate year after year. So do kids, but they cost 10% to 40% of your salary each year. (It seems as though marriage does not cost anything.) I also discovered you could forgo moving the number of spaces spun, and instead opt to jump to the starting point of any of the 4 quadrants of the game. The downside is that you don't get to draw a LIFE Card, and therefore don't get to experience any of the fun (or disappointment) of entering numbers into the little computer the game supplies that keeps track of your dollars and LIFE Points.

So I finally won a game with this strategy: I picked a career that earned a decent amount of money after 3-4 promotions without requiring a degree. I started in Love It, and got married first. I got 3000 LIFE Points and 1500 each year thereafter. Then I jumped to Earn It (lost a turn because I jumped instead of taking the spin amount). Got promoted, increased salary. Then jumped back to Earn It again and lost a turn. Got promoted again, increased salary, etc. Continued cycling through Earn It until the years nearly ran out. Towards the end of the remaining years, I had earned all the promotions and salary I could get without a degree, so I jumped to Live It and took a big vacation. By then, I could afford it, and I earned 5000 LIFE Points at the end of the vacation (my last turn). I won big time when I played with this strategy. My opponents tried the same Earn It strategy once they saw what I was doing, but they forgot to get married, and instead just earned a lot of money. My poor virtual "LIFE Wife"... We got married early, never had kids, I worked all the time, lived a boring life, and didn't take a vacation until I retired!

So being that I'm into metaphors, this game has really caused me to reflect on my own life and career. I don't want to win in real life the way I won in the game, but it almost seems inevitable. I've got the wife and kids and do abundantly enjoy many real life aspects of being a husband and father. But my career... While I don't currently "work all the time" pursuing one promotion after another, there is a great deal of melancholy in the way I am in this real life Earn It quadrant. I guess the 40's are the "earning years" and that's where I am. I don't play the lottery (which in the game you have at least a 50% chance of winning!). And I don't do business ventures - maybe I should. I don't have any living grandmothers with cookie recipes.

I am thankful for my job, and I am qualified to do what I do, and I can do it relatively well, and am relatively successful at it, and I've enjoyed it a lot more lately. But it's not my life's passion. It's not what I want to do when I don't have to do it. I don't know how many spins I have left in real life, but it seems like it is going by as fast as it does in the game. I don't want to look back as a 65 year old retiree and not have lived life to the fullest, and fully enjoyed the work I do.
Posted by Blain Dillard at 10:13 PM