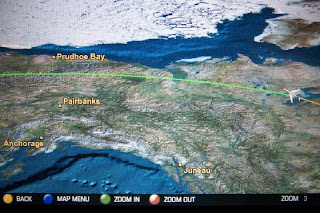 As I write this, I am in air over Canada, having recently passed a town called Yellowknife. The seats in business class are equipped with displays which allow selection of movies, games, music, or an informational map showing the plane's progress. The "follow the plane" view is always my favorite channel to watch.

It's nothing short of a miracle that I am on this flight, much less sitting in business class. I am traveling with 2 other people, Avon and Joe. Due to me trying to outsmart the weather, ie. Hurricane/Tropical Storm Hanna, I had changed my flight earlier in the week to leave Raleigh 3 hours earlier than the other. When I made that change, I instinctively thought, "I bet I am going to regret this." And I was right. What I didn't realize is that my travel agent had changed me from the 12:38pm Raleigh - Detroit - Nagoya - Manila to the 8:55am Raleigh - Detroit - Tokyo - Manila flight. I only wanted to change the RDU-DTW departure time, not the whole route. Joe and Avon were still on the later Raleigh - Detroit - Nagoya - Manila flight, with the RDU-DTW leg being 3 hours later at 12:38pm. I didn't discover that we were on different international legs until yesterday when I changed back to the 12:38 flight. Attempts to get back on the Nagoya flight were failing, as that plane was, by then, full in business class. So as we all got to the airport this morning, our hopes were that either they could get on my flight, or vice versa. We would fly together to DTW, but then separate.

Unfortunately, when we checked in at RDU, we were met with a ticket agent that couldn't possibly have been there more than a week. He told us our flight was not even going to arrive to RDU until after 3pm, and therefore there was no way we could meet our connection in DTW. And both the Nagoya and Tokyo flights are the last ones out of DTW for the day. He checked various options, including, rebook for tomorrow, fly via Amsterdam, which would put us into Manila about 10 hours later on Monday morning - but that would be 2 grueling international legs in COACH. Business class was sold out. After trying to come up with more options with him for about 20 minutes, we had decided that we would just head home and rebook everything for tomorrow. We asked if we could take the 8:55am flight tomorrow (Sunday) and he said that the earliest flight was the 12:38pm one. There was no 8:55am Sunday RDU-DTW flight. So as we prepared to rebook everything, we overheard the next agent say "Can I help anyone else going to Detroit on the 1pm flight?" And so we asked, "Is there a 1pm flight?" After a few keystrokes and confirming with the other agent, he concluded he had read the screen wrong, and our flight was just slightly delayed, not delayed by HOURS as he'd told us. So we checked our bags and went to the gate, thinking that with a little luck, we could catch our connection(s) in Detroit, and if not, we at least would be that far, could get a hotel, and for sure get out of Detroit on Sunday. Did I mention that the status board for the RDU-DTW flight was still showing "on time"?

So we got to the gate, and waited. Our connections in Detroit were at 3:30 pm (me) and 3:50pm (Avon and Joe). The RDU-DTW flight was 2 hours, and by leaving at 12:38 or even 1:15, we might have enough time to catch our connections. For sure Avon and Joe would have a better chance. Well, lo and behold, the RDU-DTW flight finally got posted as delayed with a departure time of 1:24pm. So I headed to the gate desk. I was told right quickly that I was out of luck. I would miss my connection. She said that when I arrived I would only have 10 minutes and you have to have 30. Joe and Avon would be OK, as they would have the minimum 30 minutes. I said, well I'll take my chances. I would just go to DTW and if I made my connection, fine, and if not, I would get a hotel and go tomorrow. At least Joe and Avon would make it. Nope. Can't do that. They will not let you on a flight if they know you will miss the connection. I pleaded to let me go anyway. Surely the DTW-Tokyo flight would be delayed a FEW minutes to allow me a 50/50 chance to making it. NOPE. On international flights you cannot be separated from your bags, and so they cannot let me go and stay in Detroit while my bags continue on. Whatever. There were no options. We discussed the coach route to Amsterdam again, and I declined. I wanted to get there soon, but not that bad. She checked Joe's flight and there was no availability. Not even in coach.

So she re-booked me on a flight for Sunday. She put me on the 8:55am Sunday flight out of RDU - the flight that the agent downstairs said didn't exist! All first class. So at least I got an upgrade. I felt like there was some consolation. So I took my tickets and walked away. She had my checked luggage sent back to the front ticket gate, where I could pick it up on the way out. The line behind me had gotten pretty long and the agents were helping other people deal with their various upcoming missed connections. I was talking to Joe and hatching a plan for meeting up with them a day later in Manila. As I was about to walk away, the agent ran to me and said, "Wait - Don't go yet!" She ran back and finished up the guy who was behind me. Turns out he was in the same predicament as me. He was trying to get to Manila, and was on the same Tokyo route as me - the connection that we would miss by 20 minutes. Turns out that when she checked again, she WAS able to re-book HIM onto the Nagoya flight. So she put my data in again, and sure enough, there was now availability on the Nagoya flight - even in business class! So she booked me there, and then had my luggage returned to the plane. Wow. Apparently what had happened in the 5 minutes from me to the next guy, was that other people had been indicated as missing their connection on the Nagoya flight, so several seats must have freed up. So I was very thankful and amazed at all the close calls that made this a lot more dramatic than it should have been - all because I changed one leg of my flight to try to miss the storm.

The incoming flight arrived around 1pm, and they got the people off and us on, right away. We took off - probably before 1:24pm - and it only took ONE HOUR to get to Detroit. We landed in Detroit a full hour before the connection was to leave. Indeed, I could have made the Tokyo flight, but as it turned out, I got on the flight I wanted. We even had time to grab food at McDonald's. When I went to the gate to see if I could get my seat in the upper deck of the 747, the agent said, "You're already there - In fact you're in my favorite seat - 80K!" She said it's on the back row of the upper deck, and is somehow better than the other 29 seats up here. OK, whatever. I really gotta think that God helped me out here today. So here I am... on the way on the right flight, and with my colleagues, about to enter the great state of Alaska.

Here are some other boring pictures of the flight enroute. Total was about 13 hours from Detroit to Nagoya, then another 3 1/2 to Manila. I'm in the hotel now: 12:45am Sunday night. Ready for some sleep.

Since you were going to DTW, I can only surmise that Northwest Airlines was somehow involved. As a minister, I am fairly certain that they have been contracted by satan to run part of the operations in hell ... just in case you wanted to know.