If Caleb Could Vote...

Tonight, I was helping Lori by setting up a temporary tent at the school - and voting location - to raise money for the PTA on election morning (via coffee and donut sales). I took Caleb with me, and was assisted by some other friends. Also at the school were some folks putting up a sign right next to our tent. It said

I bit my tongue and did my PTA spousal duties.
Caleb didn't. He read the sign over and said in his usual loud powerful voice, "OBAMA! Why would anyone vote for OBAMA?! We're going to vote for the OTHER GUY!" to which I said "We've ALREADY voted for the other guy." 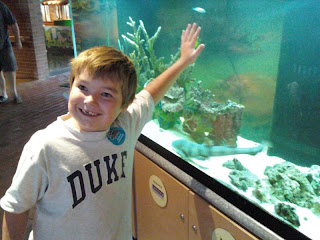 To point #2... I would question how voting a straight Democratic ticket in NC would result in any change. This state is largely controlled and run by the Democrats and has been for the length of my adult lifetime, as best as I can remember. And each year there is more and more corruption, much of which ends up in prison sentences for high-profile politicians. So not sure what kind of change would occur with a straight Demo ticket. Maybe different Democrats can go to prison in the future.
http://www.wral.com/news/local/politics/story/2693731/
http://www.wral.com/news/local/story/1090028/
http://www.wral.com/news/local/story/1105197/
To point #3... Judges. Where's the verb? Is the sign-maker suggesting that we do away with verbs and just use nouns to change things? You've got to have verbs, no matter what party you're with.
Pictured is Caleb voting for change in the fish acquarium at Marbles Childrens' Museum.
Posted by Blain Dillard at 8:30 PM

Email ThisBlogThis!Share to TwitterShare to FacebookShare to Pinterest
Labels: Caleb

I pray the Obama fanatics will be surprised at the end of this day. It is time for Christians to take a stand and be heard.

Great post Blain. You forgot one thing though. Democrats are never held responsible for their actions so it was unfair for you to point that out.