Last week was pretty blah for my investing strategies. My biggest frustration was Chinese jewelry maker FUQI, which I had bought last Friday 6/5 at $14.90, and watched climb $18.70 (25%) by noon Wednesday. Then it started a dive that lasted into Thursday. My trailing stop loss order kicked in and I got out with a nice 18% profit after 4 days, selling out at $17.64! The stock retreated all the way down to $16, then started back up. (This is when you usually yell at the horror movie actors, "DON'T GO BACK IN THAT SCARY HOUSE, YOU FOOL!") So... I got back in at $17.35. Minutes later... the stock took another turn, and headed down. It waffled the rest of Thursday, and then started a dive Friday again... all the way down to $14.81 where I sold out again around noon. Minutes later, the stock turned back up and closed at a respectable $16.80. Jason Jason Jason Jason... Kill kill kill kill.... I made about 100 bucks, after commissions for 4 trades. That's 2.8% for a week, which in retrospect is not bad.

For the week, the Dow was up 0.4% and the NASDAQ up 0.5%. I got into several top IBD "top 10" stocks this week, and the only one that ended the week up after I bought it was Neutral Tandem (TNDM). There are several of the top IBD stocks which have experienced pull backs this past week. One that is closest to its 10 week average is World Fuel Services (INT). 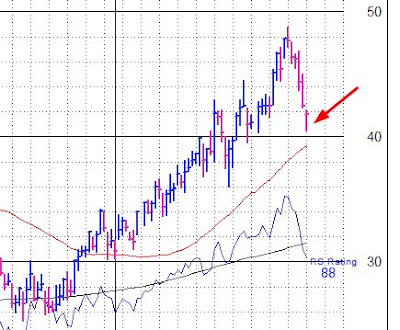 When a growing stock tests and holds up at its 10 week average (chart arrow), this is a sign of strength that the stock may follow through with a breakout. So I will consider getting into this one this week, as the fundamental data for this one is pretty good. And if FUQI drops back in the $15-$16 range... I may jump back into that one as well. It's #1 on the IBD 100 list this week (6/12).

So that's all I know this week. I'm still relatively clueless, but I am enjoying learning some new analysis techniques.
Posted by Blain Dillard at 3:28 PM