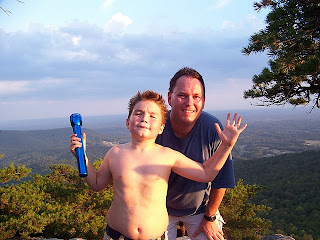 We left home Saturday around 2 and arrived around 4:30pm.  We pitched our tent after finding a spot high enough off the ground since we were expecting rain. Once camp was set, we hiked up to Hanging Rock.  That was quite a long hike, mostly uphill.  I took many pictures of the boys along the way, and then we finally arrived at the top.  It was quite a beautiful view, overlooking the valley and across to the Blue Ridge Mountains.  We took a bunch of pictures, and then headed back to camp.  It was dark for most of the hike back, and we had to use flashlights.  It was fun talking about all the bears and creatures that must be in the woods ready to pounce on us.

When we got back to camp, we grilled hot dogs.  I put on the pot of chili I had brought from home, and also provided some diced up onions.  It's the little things like that that separate a good cookout from a great cookout!   After dinner, we gathered around the campfire and told scary stories.  By then it was around 10:30pm, so we turned in.

It was no later than 10:45pm when it started raining - and raining hard.  It was really nice, since our tent was properly positioned, and did not leak.  It had also cooled down into the low 70's and was an excellent night for sleeping outside, especially with the rain going on and off all night long.  I had a good night sleep thanks to a new foam bedroll I used, and also the sleeping pill I took before bed.  :-) 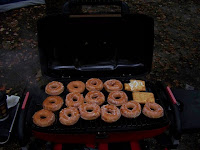 We awoke around 7:30am.  I grilled donuts on the grill, and they were excellent, probably thanks to a little residual flavor from the prior night's hot dogs.  Russ Hemingway made some great coffee using his signature old tin coffee pot.  It was a good meal for men and boys.

Then we dismantled the tents, and packed the cars.  We drove to the next hiking event, which was Tory's Den and Tory's Falls.  The Den was pretty cool, but the Falls were not too impressive.  The den is a cave supposedly used by Tories during the American Revolution.

We had had enough of hiking by this time, and were able to convince the boys it was time to leave and seek ice cream on the trip home.  We arrived home around 2pm, a mere 24 hours since we originally departed.  It was a fun "day" spent with Caleb and the other Carpenter Coyotes.
Posted by Blain Dillard at 10:34 PM