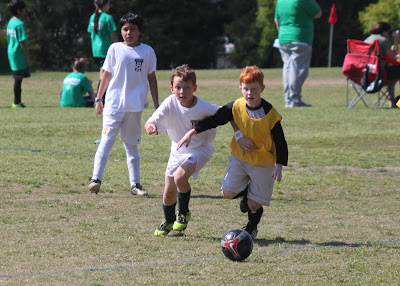 Luke had a soccer game yesterday at 5pm against his former team, The Revolution, and 2-time consecutive champion (they won once with him, and once after he changed teams).  It was tied at 0-0 in the 3rd period, and one of our kids finally scored.  Then moments later, Luke broke away and scored... Then again... The coach left him it at mid-center (his favorite position)... then he scored again.    Three goals against his undefeated former team.  It was a great game for him, and we won 4-2!!

He has such great athletic instincts.  He's just a natural at whatever sport he tries.  I have him signed up for Wolfpack Boys Soccer camp this summer for 1 week.  It's a day camp at NC State taught by State coaches and players.  I hope that he will enjoy it, and will want to stick with soccer.  He says he doesn't really like it, but he's so fickle that that changes from month to month.  I'm sure he liked it yesterday!  I really think that if he were serious about it, that he could get a scholarship.  Right now, it's just fun.

Here's a picture I took LAST week...  (we won that one 2-0)...   I love this picture because Luke's eyes are looking ahead to where he's going with the ball...  towards the goal!

Not sure where he got his soccer skills... surely not from his parents!!
Posted by Blain Dillard at 2:32 PM

Email ThisBlogThis!Share to TwitterShare to FacebookShare to Pinterest
Labels: Luke