As I look at the archive for my month old blog, the tally is telling... September: 10 posts... October: 1 lone post. I guess the blogging honeymoon is over already. Since the Hilton Head beach trip, it's as if there's nothing to write about. But that's not really the case. This month has been pretty eventful.

After the beach, we went to the NC State Fair. We went through 9 books of tickets, which we bought in advance to save almost 50%. The Fair has about 6 fun houses, and every one of them has the same layout, and same slide at the end. That was where most of the tickets were spent. The other popular ride, and ticket consumer, was The Crazy Mouse, which is basically a combination Tilt-a-Whirl and roller coaster. Imagine spinning in a circle while riding a roller coaster. Once was enough for me. The kids rode again, with complete strangers.

Then we went with my parents and my family to Aunt Beverly's mountain home outside of Stuart, VA, for a Saturday afternoon visit. This was

our first trip there since Lori and I have been married. The kids had a ball. They enjoyed getting BB-gun-shooting lessons from Bev and then shooting tin cans and a personalized bulls eye. After lunch, they got to check out Bev's tarantula, and look for insects in the yard to feed the tarantula.
As a kid, when I used to go to my sister's in the summertime - for what seemed like months at a time - there was no gun shooting (well maybe some) or insect searching (any insects found were unwelcomed). This was back before computers, the Internet, and GameBoys were invented. What on earth did we do?
What I remember is not necessarily entertaining or fun-packed, but good nonetheless. I remember honing my stamp collecting skills by going to the only post office in town to see if there were any new releases. I remember doing nothing in particular during the day, but riding back home after sundown in Bev's yellow Jeep CJ-7 with the top removed. 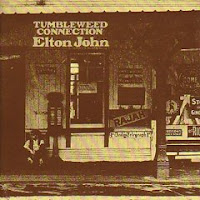 Though it was summertime and miserably hot during the day, it was cold in the evening, especially as you left the bright lights and big city heat of Stuart - with its one traffic light - and headed to the real back roads and cool dark sky of Patrick County. We would have the heat on, and would listen to the 8-track tape of Elton John's Tumbleweed Connection, which, to this day, is still my favorite Elton John record. It was worth being cold.
Back at Bev's house, there was little to watch on TV, as this was pre-cable and pre-satellite, and her mountain antenna reception wasn't that great. We would play Bach records and play with the crazy Siamese cat Moo Moo to the rhythm of the music. We would play guitar some, as Beverly would self-teach herself to play lead to some song, and I would strum along the chords. Not sure if that was the "camp song" - or not - that our parents have fondly reminisced about ever since. We both wished we could play like John Denver.
Sometimes we would venture up onto the Blue Ridge Parkway or beyond. We visited the home of our ancestors in Grayson County and would go look at old tombstones, searching for our great-great-grand-something or another. We took pictures of things, and developed and printed in Bev's home darkroom.

There was no home cooking of vegetables, beef roast, or pork chops... but really good tacos, spaghetti, hot dogs, and Hamburger Helper. During the stay, we would easily eat a whole pack of 100 cookies - half chocolate and half vanilla. It was all good.

I would never trade the times at the NC State Fair with my family, braving the crowd, tolerating the noise, and riding The Crazy Mouse. But as I have grown older, and gotten busier, I often crave the quiet and simple and seemingly humdrum days that I experienced as a child, spending my summers with my big sister in the mountains of Virginia, doing nothing in particular. Those were great memories, without a lot of technological entertainment. It's a rare time these days when there is solitude, with time to think, and quietness, with time to listen.
Posted by Blain Dillard at 2:47 PM

Exactly as I remember it, too! Those were the days, huh? Glad the boys and Lori could come and experience just a "touch" of what it was like, back when....and glad you came and stirred up such fond memories, not just for you, but for me, as well! Love you!