Our Trip to Hilton Head, SC

This morning marks the end of our "summer" vacation to the beach, this time to Hilton Head - three nights and four days in what was predicted

by esteemed meteorologists as 4 days of "severe thunderstorms, lightning, 80% chance of rain, up to 1/4" of rain." What we got was occasional white puffy clouds, frequent blue sky, mild temperatures (80s), and the usual dose of beach humidity. We may have turned the wipers on for 30 seconds one day, but that was it! That's the unpredictability of beach weather.

For me, there is nothing like the beach, and seeing and hearing the ocean. It just keeps on going.

I see the beautiful homes here, many along the beach, and just imagine what it might be like to live there. Not necessarily in the home - but on the beach. To be able to sleep on a screened-in porch and hear the real ocean, not the fake ocean as played by my sound conditioner back home. I can dream... and if that day never comes, we still have vacations. Our first night here at the Marriott was a nice view of the entrance road and parking lot. After some confusion and gnashing of teeth, we moved to a beach side room for the last 2 nights.

The most distinctive thing about this beach trip was the environment. Hilton Head is more low key than Myrtle Beach. 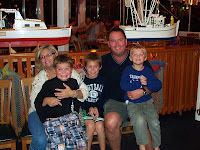 There are no big lighted signs pointing to the Dixie Stampede just ahead. There are dark unlit roads weaving through quiet neighborhoods in gated communities leading to a marina where a restaurant and its T-shirt store are located. The have putt-putt here, but no NASCAR Speedway Fun Park. They have pools, but no splashing sliding bucket-dumping water park. Lori and I compared this place to Bald Head Island, but with cars and a competitive free-market economy. (Note: Bald Head Island, SC has golf carts for transportation and few restaurants and stores, which seem to be run and/or tightly controlled by the government of BHI - as it probably has to be - otherwise, you would need cars, and that would spoil the point of BHI - which is to RELAX. But I digress.)

We brought 2 bikes here from home and rented 3 from the local bike rental store. Then we became cruel parents and forced our children to ride bikes around the community and on the beach. I really hated putting them through that as it was very traumatic to have to participate in recreation not involving the pool, beach, Cartoon Network, Nikelodeon, Play Station, Nintendo DS or Gameboy. I expect that when we get home, they will fondly talk about riding bikes on the beach, in and out of the edge of the surf, and will look forward to that on future beach trips. I know I will.

Caleb & Seth enjoyed the ocean probably more than anything. They would stand in the water up to their belly, and get smashed by waves, over and over again. I think they would do it for hours if we would let them. But that is a very stressful activity for a parent - maintaining focus on the 2 little bodies playing in the water. So we did that for about an hour each day, and I'm sure that is what they loved the most about this whole trip. Luke's thing was playing in the indoor pool and hot tub. That's a lot easier to manage. And we all watched The Lord of The Rings movies at nights (we had never seen them), as Luke and Caleb fell asleep... and then the rest of us... and the room became quiet. And the ocean kept doing its thing outside.
Posted by Blain Dillard at 8:35 AM

Email ThisBlogThis!Share to TwitterShare to FacebookShare to Pinterest
Labels: vacation

Well done! I always enjoy reading these additions!
Where do you find the time?
Sis

Pictures are great. Glad you all had a good tie. Enjoy life all you can while young and thank God for the ability to do so.