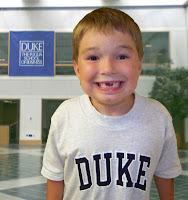 Today was the big anti-climactic day for me at the Duke Fuqua School of Business. Today was the "prospective student" campus visit. I also had my application interview. I say "anti-climactic" not because I came away disappointed (I didn't), but because I knew that instead of this step being a few steps - and months - away from actually entering the program, it was instead still very much an uncertainty, with no definite path to fruition.

I was hoping that I would leave today with a sense of "belonging" or not. Did I fit in? Or would I feel out of place? Knowing that the chances are slim and none that I will be entering school in the next cycle which begins March 2009, would I still be interested in Duke? Would Duke still be interested in me? How patient am I?

Undoubtedly, as of today July 25, 2008, I believe that I will someday attend Duke's business school and work towards an MBA. Two months ago I would have never thought such a thing. Not because I didn't think it was possible, but it was not even a consideration then.

Today I experienced many unexpected things. First of all, SHY and QUIET me... as I sat at my table with the construction business owner from Asheville, the entrepreneur from India, the young executive from Wake Forest, and a Vice President of a brick company in Charleston, I found that it was me that was initiating the conversation and asking the questions of others. I also got out of my shell long enough to approach total strangers who were current students, and start talking to guys who looked like alternative band members, but who were so articulate and intelligent, I could not help but be engaged by what they were saying. I attended an actual class on Negotiations. I took in the material and answered in my head some of the questions the professor asked, as they discussed a film clip from the movie Wall Street.

I was impressed. And I felt at home. I felt like there was challenge there. Earlier in my education life, I sought more depth in Computer Science via advanced education at Ga Tech. The MBA is an advanced degree where I would broaden my scope and knowledge. I want that. I am eager for it.

My interview went very well, and I think I would be accepted should I apply. I showed my colorful business case charts to the interviewer. He seemed surprised - or perhaps flattered - that I would spend so much effort on a case to get myself into Duke. He complimented my "consultant" deck of charts, and then we were done. So I hope that showed my level of due diligence. At this point, my essays are done, and I have 2 of my 3 recommendations submitted. The last one should be posted this weekend. My plan we agreed to was that I would apply, without the letter of company support, and without any means for paying. And then they would send me a letter of conditional acceptance, provided I was accepted.

So I have done my homework. I will get the GMAT out of the way in 2 weeks, then I will leave it to God and IBM to decide what comes next and when. I am beginning to contemplate the thought of paying my way 100%. After buying DUKE shirts and/or shorts for everyone in my family, I can't possibly not go.

So what about the picture shown? While I would say that is "how I felt," the reality is that is Caleb (age 7) minus 2 front teeth, superimposed on a cellphone photo I took today at the student center. And right now, he and I are both just prospective students.
Posted by Blain Dillard at 10:50 PM

Email ThisBlogThis!Share to TwitterShare to FacebookShare to Pinterest
Labels: MBA