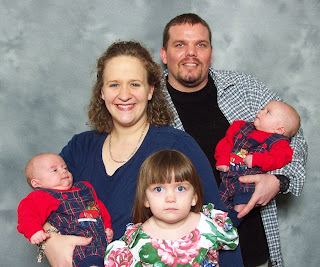 Last night I heard the very sad news that a friend of mine and brother in Christ, Dwayne Cross, had tragically been killed in a car accident on the way home from work. According to the news report, Dwayne was 35, which is much too young to lose your life, but reminds us that each and every day is precious, and tomorrow is never promised.

Dwayne and his family attended church with my family for several years starting around 2001. They moved to Indiana a few years ago and Dwayne worked as a security guard at the University of Notre Dame.

I didn't know Dwayne very well when we attended church together. I took a lot of photos for the church, and as I looked this morning for images to remember Dwayne, I found him in the background more than the foreground. He was a quiet guy who was not out in front of the camera very much. But even more so, I think Dwayne was a guy who was just humble, and who worked very hard to provide for his family.

In the years I knew him, I remember him as a new Christian, whose faith was growing year after year. We attended Promise Keepers together in 2005, and I remember Dwayne growing in his desire to know the Lord and serve others. One thing in particular that impressed me about Dwayne was his focus on keeping things simple and on what's important. He wasn't a lofty theology teacher by any means. He was plain-spoken and matter-of-fact. He was secure in his relationship with Jesus, and had a sense of "realness" about him, imperfections and all.

In one particular instance, Dwayne and I were in a men's group together. I'm not sure what the connection was, but Dwayne was very instrumental in our group adopting an orphanage one Christmas and taking gifts to the children. I recall that because the orphanage was associated with an organization that some did not agree with, and because it was 30+ miles away from our church, some argued that we should not take on this project. I remember Dwayne being vocal and adamant about supporting the project, and saying basically (I am paraphrasing)... "It doesn't matter how far this is or who ELSE supports these kids - WE need to do something here, and help them." And so we did.

Dwayne was a tough guy. He was strong. He worked as a guard at the prison for a while, and I'm sure his life was often in danger. But he could handle it, through the strength God gave him. I know he used those hard environments to share his faith. While the rest of us stayed in the comfy suburbs, Dwayne lived out his faith in a very hostile world.

I believe Dwayne was a big teddy bear inside. I'm sure he wasn't the perfect husband and father, nor are any of us. But I am sure because of his faith in Jesus, that he is with Him now and for eternity. So maybe I knew Dwayne more than I thought.

Every moment is precious - let's not forget it. Goodbye Dwayne. We'll miss you.
Posted by Blain Dillard at 2:33 PM

Thanks Blain...for painting a vivid picture of Dwayne with your words..We will pray for Michelle and the kids...and pray Dwayne is in the arms of Jesus today.

Blain,I read with interest your comments regarding your departed friend, Dwayne. It was very inspiring for me to read this and I feel sure that he is aware of your feelings about him while basking around in Heaven. Good job.