Seth and Me at NC State 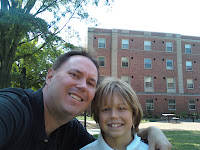 Today I took off work and will be attending my accounting class in person. Seth came with me so he can get a taste of real college life. Here we are outside of my old dorm, Tucker Hall. The top left room was mine ... 359 Tucker... "Corner room at the Y." The dorm looks to be co-ed now.

We were walking past Reynolds Coliseum and Seth noticed and asked about some man-hole covers. "What's in there?" he asked. Ironically, from my memory, the one he had asked about was one of the entrances to the steam tunnel system underneath the campus. I had told him about the days when we would climb down underground and then wander the maze in the "otherworld" beneath NCSU. So I guess he found it. Upon searching the web, I found something that indicated the tunnel entrances have been secured since after 9/11. So I guess he'll never know the fun (or fear) in running through the tunnels after midnight.

Then we went to the brickyard area where we had lunch 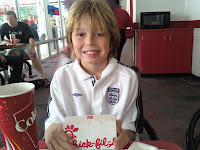 Out in the brickyard, there was what was known as "the brickyard preacher." Not sure if it's the same person year after year, but the message is the same, "Turn or 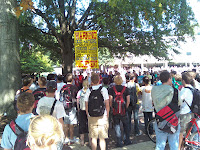 burn, you worthless evil drinking sleeping-around college-aged sinners!!" (click on picture to read the sign) The crowd usually stands clear of the guy, but in this case, I think an athiest was getting into a shouting match with the Most-Righteous One, and so the audience moved in closer. I have to wonder how effective this method of evangelism has been over the years. Perhaps they should try actually meeting people and telling them "You know, none of us are perfect. We all screw up and do the wrong things sometimes... Even so, God loves each and every one of us, and wants us to know him." Nah... that would just fill up our churches with a bunch of sinners and people with problems. 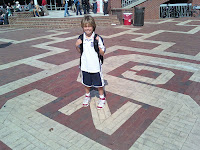 Then we walked around the brickyard some more and got the picture with the upside down NCS brick logo. We went into the incredible DH Hill Library, which was alive with students and collaboration and computers and studying... It was amazing to see the bustling and lively environment. It was peak season on campus.

We then walked down "engineering row," passing the buildings for nuclear, mechanical, industrial, and electrical engineering (at least that's what they used to be in the 80s). Then, when I pointed out the chemical engineering building, Seth commented, "Yea - I thought I smelled something." So that was a good laugh for me. Those Chem-E's and their noxious experiments.

Hopefully all my boys will make it to college somewhere, perhaps even to NC State University.
Posted by Blain Dillard at 1:07 PM

Email ThisBlogThis!Share to TwitterShare to FacebookShare to Pinterest
Labels: seth