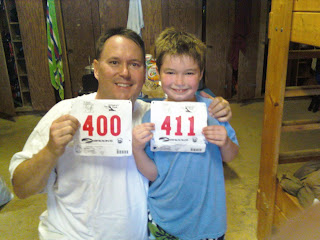 Caleb and I ran/walked a 5k race this morning at the Y Guides Spring Outing. I was extremely proud of him! He made it the whole way.

The race time was at 8am and at 7:45 he was still in bed and refusing to get up. With bribery of a donut in bed, I coaxed him into agreeing to at least walk to the race start. He vowed the entire way that he would not do the race. He wanted to swim, play on the playground, or anything other than walking or running for 3.1 miles.

On the way to the flag pole, the meeting place for the racers about 300 yards from our cabin, Caleb fussed and dragged his feet. On the way, I was polling other dads to see if they were planning to run, and if not, perhaps Caleb could hang out with them and their sons (thus defeating the whole purpose of this father-son weekend). I really wanted to run (or walk) in this race myself. I originally had my iPod ready to go, to fade into my own world of run-tertainment, especially since I had barely put 5 miles on my new running shoes in all of 2009. But doing this alone didn't feel right. So we proceeded to the flag pole, with Caleb in tow, while I was still trying to reason how I could have my cake and eat it too. The raceway was essentially 3 times around the trail which encircles all of Camp Seafarer, with each loop being 1 mile. My plan was to just get him to start the race, and then perhaps I could let him take a break at a playground, while I made another lap around the campground.

Several other dads in our tribe were also participating in the race. Brown Bear, the camp director, gave us instructions. Dads and sons must stay together, whether walking or running or stopping. She moved us over to the real starting point... the giant boat anchor in the road over there behind that building. That would be the starting point, mile marker, and finish line. Humans who complete the race get a cool 5k race patch for their Y-Guides vest. There were only about 40 dads and sons participating in total, out of about 400-600 in the whole camp - so this would indeed be a special accomplishment for those who braved the 72 degree May morning by the slightly breezy North Carolina intercoastal waterway (read, "perfect morning").

We pinned on our race numbers and then the race started. All the boys took off at 100-yard dash pace, while dads hollered, "Slow down! Pace yourself!" repeatedly. Caleb was right behind them trying to catch up to the speedsters. Eventually he slowed down as did the many other boys, and the race was underway at a more reasonable pace.

Caleb was wearing Crocs... and, get this... with NO socks. I had a pair of socks in my pocket in case he changed his mind. I asked him many times if he wanted my pocket socks for his Crocs, but no Croc pocket socks - Caleb was happy with his sock-less Crocs. So at that point I had resigned myself to run or walk as far as Caleb wanted, and then quit whenever he gave up or fussed at an unbearable level. But off we went. He would run for 20-40 yards, and then walk. And I was right there with him. I actually appreciated the fast/slow pace he was setting.

Soon we discovered that Craig and Kyle, another father-son pair, were travelling at about the same pace as us. Caleb seemed to want to stay ahead of Kyle. Everytime Caleb would walk, Kyle would catch up. Then Caleb would start running again - long enough to put 20-30 yards between him and Kyle. This seemed to be motivating to Caleb, who typically does not have a competetive bone in his body, at least not when it comes to sports. It also kept Kyle going.

After 10 minutes of this cat and mouse game with Kyle, I started to think Caleb might make it the whole first lap. I encouraged him to keep it up, and told him how great he was doing. He just kept going and going. Craig called him the Energizer Bunny for his persistence. I kept asking, "Are you OK? Anything hurting? Do you want my pocket socks for your sock-less Crocs?" and Caleb just said "No" and kept on going.

Well, we made it through the first lap, and I was just so amazed, as we had far exceeded my wildest expectations! Brown Bear commented over the loud speaker, "Here comes someone with Crocs!" I thought maybe Caleb would want to stop, but he kept going, and Kyle was right on his tail. He confirmed that there were only 2 more times around like this one, and so we kept on going. Back and forth he and Kyle went, with Caleb mostly staying out front. I thought about throwing in a $20 bribe. "If you make it all the way, I'll give you $20." But I decided not to play that card unless necessary.

As we got near the 1.75 mile point, we were near our cabin. I signaled to our fans (Russ and Jack) that we needed some water. So they ran and got several water bottles. Then I showed Caleb how you get to pour water on your head to cool off when you're running... So we did that. 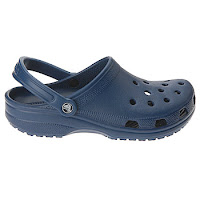 As we got near the 2 mile mark, back at the anchor, Caleb's right sockless Croc fell off. Since Kyle was nearby, he didn't stop to put it back on, but instead carried the right sockless Croc in his hand, and ran barefooted with one Croc on the other foot. He maintained his lead over Kyle, as he crossed the 2 mile line as Brown Bear said "You can even run this race with ONE Croc!" (There were people hanging around the anchor watching the race drama by this time.) Caleb's determination and focus was amazing. He did put his Croc back on at the start of lap 3.

So we kept on going, and going, and going. I asked many times about needing a sock for his sockless Crocs, but he declined. He said that his side was hurting some, but otherwise, he kept on going. Near the 2.75 mile mark he took a big shortcut, which was perfectly understandable, but Kyle kept going on the main trail. Caleb eventually tired out and actually sat down on the trail about 30 yards short of the finish line. He said his side was still hurting. Kyle ran on past, and finished the race. Then Caleb got up and ran on across as well. He didn't seem to care that Kyle edged him out at the end. But he DID IT. And got the patch. And so did I.
Posted by Blain Dillard at 9:30 AM

Email ThisBlogThis!Share to TwitterShare to FacebookShare to Pinterest
Labels: Caleb

WTG Blain and Caleb! That is great!

That is amazing! The kid ran in those shoes of all things! Amazing!

We are doing a 5k in June, but I'll be walkinggggggggggggg. I'm not a runner, though I think it would be awesome!

WTG. Now, get your behind back on track! I mean it!

Hey, great race by all of you.
Maybe some day there will be the Great one croc only Boston Marathon. Nice blog, and what beautiful beach is that you are on? Cancun?
See ya,
Jerry, Terri, and Marie