It's been months since I posted anything to this Blog, and years since I posted anything reflective or substantive. Facebook is half to blame. The iPad on which I type this is the other half. Facebook - because I have otherwise been writing and sharing my pithy thoughts and ramblings in the "status" box of Facebook. iPad - because there is so much to do on this thing... read a Kindle book, play Words with Friends, check email, check the weather, play Words with Friends, etc. Who has time to write?! 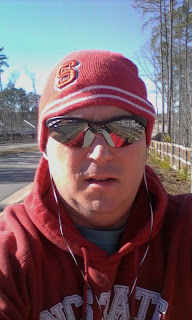 Today marks the 30th day in a row I've walked at least 2 miles. Along with that has come a feeble attempt at eating better. Combine the two, and there's yet another diet in the works. I knew I had documented my Diet of 2008 (D08) pretty extensively, and this afternoon I went back and read my Blog postings about it.  Someday I need to do a postmortem on that adventure and try to learn something!

Since D08, I've also lived through D10, where Lori and I spent a few thousand dollars at Metabolic Research Center to lose weight together. I think I lost almost 30 pounds then. We took a couple of pictures of our new selves, then headed back in the other direction. Then there was the short-lived D12, where I tried to go "au naturale" and actually just eat a healthy diet, while also consulting a psychologist for "mental help." When I told him my theory of how I equated diets to relationships, his eyes got real big.  I think he determined he was over his head. Well, at least I did.  I think I lost about 12 pounds during D12.

Anyway, this time around I've been walking. My theory is that I need to pick a healthy habit that I can do every day.  I can't run every day.  I can't run occasionally, and increase my duration or speed.  Well, I could... But it just doesn't last.  I'm thinking if I set a bare minimum goal that is relatively risk-free of injury, and also has no pressure to do more or faster, then I can stick with that longer.

That's all for now.
Posted by Blain Dillard at 4:36 PM