A West Meckenburg Indian Looks at 30


As I write this, I am aboard the Amtrak Piedmont Train #73 bound for Charlotte for my 30th high school reunion.  Lori will be driving later to join me for the weekend’s festivities.  I had planned to enjoy the solitude by reading.  But here I sit, overwhelmed with a burden to write. 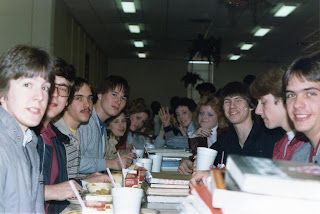 As I was always Kenny Kodak with the camera, I am thankful to have many pictures to remind me of our high school days.  As I’ve gone through the photo albums the last few weeks to scan pictures, I am fondly reminded of many memories. 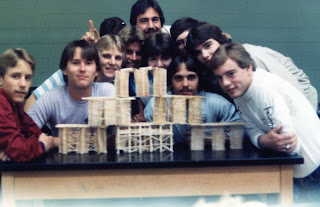 First of all, there’s the theme of math & science versus the arts.  By arts I mean dancing, music, reading, writing, and history.  In high school, some of my friends and I expressed outward disdain for the arts.  I guess you love the stuff you’re good at doin’, and despise that at which you are not good.  Or is it well?  We simply loved math and science, and found anything else to be an unnecessary distraction or annoyance.

Hopefully, my ability to construct an effective, nearly proper, and grammatically correct sentence must have improved some over the last 30 years.  Alas, I have had to repent of my anti-arts sentiments.  While I still can’t dance a lick, I have found that I’ve enjoyed all types of music - except jazz - including classical and even some specific types of country music.  I attended, and even generally understood, a ballet of “Romeo and Juliet” at the Sydney Opera House.  I enjoy reading voraciously, writing passionately, and learning history in epic proportions.  I’ve even taught a 7th grade Language Arts class the importance of “Language Arts in the Real World” where I demonstrated the criticality of reading, writing, and communications as a key to career success - even in a technical job role such as engineering. 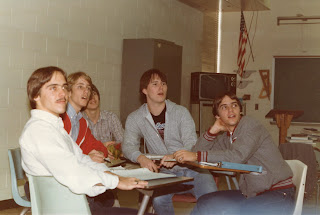 But this is not about that. This is about people.  As I’ve reviewed and scanned photos, I am reminded of friends and other classmates.  Some were close.  Some were merely acquaintances barely known or mutually tolerated.  Some are married, remarried, single or divorced.  Some are no longer living.  Some were camera shy and had to be caught off guard to be photographed.  One friend complained he was not in our (my) photo album enough, and so I took a picture of him complaining.

There are pictures of the things we did to have fun, like Frisbee in the courtyard, or handball in the hallway.  There were poses reminding me of inside jokes or relationships gone bad or mocking others, in fun of course.  There were goofballs and flirting and foolish behavior.  There were teachers we loved and ones we despised.  There were student lobbyists making their case for a better grade.  There were sad people and happy people.  There were girlfriends and one-time dates.

Andy Stanley has said that your friends greatly influence and sometimes determine the direction and quality of your life.  I feel very blessed and fortunate to have grown up on the west side of Charlotte, NC, with one of the best circles of friends a kid could have.  I have been influenced academically, relationally and musically by the few dozen or so classmates I was closest to during those formative years.  While we were not angels, we generally stayed out of trouble, and certainly our competition academically was healthy for all involved.  I owe a lot of my blessings to having known the many guys and girls of the West Mecklenburg High School Class of 1983.  There are still a few friends that we have not located, but I do hope to give more attention to these friendships established some 30+ years ago.

Now, I’ve got one hour left before I arrive.  Time to read.

Posted by Blain Dillard at 5:07 PM