Yesterday, I had my first glimpse of what it is going to be like as our kids leave the nest over the next 1 to 5 years.  Seth is a rising Senior and we dropped him off at NC State Engineering Camp yesterday.  It's only for a week, but it felt significant.  It was a flood of emotion as we walked from the car to the check-in spot.  Him, walking faster than me.  Me, walking faster than Lori, so he didn't completely leave us in the dust.  We rounded the corner and it was clear that no one was in line, and there were no less than 6 NC State students welcoming! - cheering! - hollering! - for Seth as he speedily entered the lobby to register, and we brought up the rear. 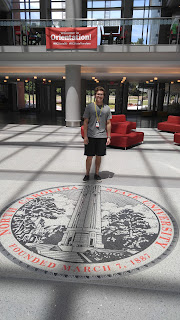 Seth soaked it in and accepted the applause and fanfare.  In that moment, I envied him for what he was about to experience.  But now it's his turn.  His turn to experience freedom and responsibility and learning and higher education and having fun and making mistakes but hopefully not too many.  And I was overwhelmed with that feeling you get when your child is old enough to take care of himself, and is one year away from proving it.  I can sort of imagine what that will be like - like a camp drop off, but for a much longer period.

It made me think back to when I started college.  As a child, I had a great relationship with my parents.  They gave me ample freedom as a teenager.  I believe they always trusted me, and I never had a curfew that I remember.  But still, I couldn't wait to get to college and be on my own.  Only now, 30+ years later, can I fully appreciate what it must be like to have your kid so anxious and ready to be on their own.  It's not the greatest of feelings, frankly.  But I suppose it's an essential milestone of parenthood.

If Dad was still alive I would like to ask him - Did you cry when you dropped me off at NC State in August 1983?   Were you upset when I returned to school before Christmas break was over?  Or when I went to summer school the year after my freshman year instead of coming home and working there in Charlotte?  I'll ask Mom.

I really appreciate the support my parents gave me, and sacrifices they made so I could go to school and finish debt free.  I'm sorry for any tears they ever shed while I was off being independent.  But, I think to a large degree, that is a measure of parenting success - when your kid wants to be an adult, and is ready to do it.

We spent as much time as we could.  Making up his bed with soft sheets and a foam pad.  Running an extension cord.  Looking around.  Getting ice cream at the Howling Cow.  Killing time.  Soaking it in.  Freeze this moment a little bit longer.  Make each sensation a little bit stronger.  Time stand still.  Then we quickly said goodbye as he suddenly joined the other engineering campers at the appointed time.  And that was it.  He'll be back home on Friday.

One more year, and then the nest starts to empty.  Five more years, and it's done.

Posted by Blain Dillard at 6:07 PM