Another Dream About Dad - Visit to Rush Limbaugh

Last night, I dreamed about Dad again.  It's the first time in a while that I had a dream about him that I so vividly remember.

In my dream, Dad was going to meet Rush Limbaugh for what seemed to be a recurring meeting.   It had been several months since they had last met.  The meeting location was in a small building at the top of a hill with several plateaus leading to the top.  I walked Dad into the building which was on the top plateau on the right side of the hill.  There were some other people in there, so I just left him there and would come back later, assuming he would meet with Rush. 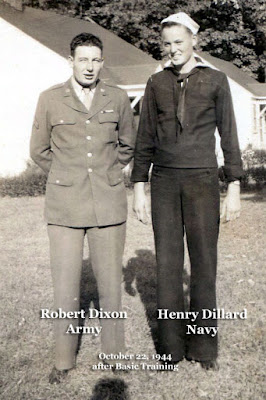 When I came back, Dad wasn't there.  I was told that Rush wasn't meeting one on one anymore due to his own illness.  I looked for Dad and found him on the left side of the top plateau, further up the hill, standing on the edge of the woods.  He was the younger version of himself.  Tall and lanky.  Much like this picture from his early Navy days.

It occurred to me that I should at least get a picture of Dad and Rush, so we headed down the hill trying to find Rush Limbaugh.  But we were not successful.

At the bottom of the hill, there was a funeral going on.  A young sailor was in the casket in modern Navy attire, but it wasn't Dad.  The sailor was not lying supine, but on his side, like he was sleeping.

My sister Beverly asked me where Dad was and was worried I'd lost him.  I was worried too, as that was the 2nd time I'd lost him during this dream! Fortunately, I quickly found him again.  He was his older & bigger self again and had walked down the hills alone. I wondered how he'd done that safely, as the hills were pretty steep.  I gave him a hug and was steering him back to the funeral ceremony.

The family was walking in, including some I'd not seen since childhood.  I bumped into one who was a former spouse of my cousin Billy Wilkinson.  I believe her name was Kitty, and I think I was in their wedding as a young boy.  She didn't recognize me.  In an effort to introduce "adult me" to someone who knew me as a child, someone told her, "That was Blain."  That was the end of the dream.  Unfortunately, Dad didn't say anything during this whole dream, but it was good to see him.

I always wonder the relevance of random dreams.  Last week, my father-in-law Gerald Dillon passed away.  So maybe that was the tie-in to the funeral.  And the cat the Dillons have is named "Miss Kitty."  And in my dream, Kitty looked exactly like someone I met at Gerald's funeral - Lori's Aunt Kathy from Texas!
Posted by Blain Dillard at 12:09 PM

Email ThisBlogThis!Share to TwitterShare to FacebookShare to Pinterest
Labels: dreams