The Diet of 2008, like any of the 13 prior diets I've been on, started out with an index card. The index card is where I write down my daily weight, sometimes erasing and rewriting it if my weight drops a fraction of a pound further during the day. This is different than The Diet of 2002 when I only wrote down my weight when it went down. I should probably have stuck with the 2002 method... That year I lost 29 lbs over 234 days. For the Diet of 2008, henceforth known as D'08, I have to lose 29 pounds just to get to the point when I usually start a diet. 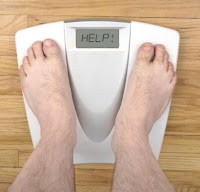 There are other differences in this diet and previous ones. I have a motivational slogan this time, whereas previously I did not. I'm going to lose "40 by the 4th." For D'02, there was no slogan, just bad food and a lot of water.

To me, diets are like relationships. That's why I'm so reluctant to start each diet. Why start this new diet, when the last one just didn't work out? I really thought the previous diet would be my last. I invested time into it. I loved and cared for it. I had the right intentions. But then, I fell out of diet-love. Me and the diet went our separate ways. Perhaps I made some mistakes, but the diet did too. Will this new diet be "true diet", or just a "rebound diet" started too soon after the last diet ended, and after one feel-good night of better eating and a little casual exercise? Indeed, diets are like relationships.

For prior diets, I went into them with high expectations. Like when I did D'04, I was going to forever change the way I ate... I would change my lifestyle. I'm going into D'08 with a different perspective. I plan to lose my weight and then go to Taco Bell and gorge myself on all that which I desire. At least I'm honest with myself.

To more efficiently expedite this diet, I'm also working out about 5 days a week now. Working out is such an appropriate phrase.

"Working" - doing something you don't want to in order to receive some reward that is barely a fair exchange for the effort and time required to accomplish the aforementioned work.

So not only am I doing something I don't want to do, I'm doing it somewhere I don't want to do it. Working out is the dieting trajectory accelerator that can be sustained or squashed depending on which of these 3 variables trumps the other first.

So here I am, blogging about my stupid diet - The Diet of 08. Again, I'm trying to do this one differently. Not differently in a way that Dr. Phil or Weight Watchers would endorse. But just trying to mix it up a little bit. In all of my prior diets, I did NOT blog about them at all. So, I am on Day 34, and I've lost 15 lbs. Hang on, let me go re-weigh and see if that has changed any since this morning.

Oh Blain, I feel your pain! I pray God gives us wisdom and strength to live healthy lives!