I have noted already that this was going to be a pretty well documented diet. I'm keeping score pretty closely using those little index cards I keep in the bathroom drawer. 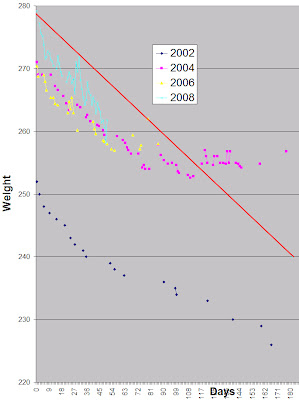 In general, this diet is not much different than previous diets, in that I can pretty easily eat well and exercise for 3-4 months, and knock off 20-30 pounds. I don't think I've eaten any better or exercised more on this diet than some of these previous ones.

What I have done differently is try a new product called Alli™. Alli (pronounced al-eye) is a GlaxoSmithKline product, and is the only FDA approved over the counter "weight loss aid." Alli prevents your body from absorbing about a quarter of the fat you eat. Supposedly, you can lose 50% more weight if you take Alli while on a diet. You have to be on a diet for this to work, as there are very nasty "treatement effects" if you aren't. I have been using this since about week 2 of this diet and have noticed NO side effects at all. So after 50 days, I think the data shows... this stuff must actually work!!! The bad thing about Alli is it is quite expensive - about $2 per day for the 3 pills required (one for each meal).