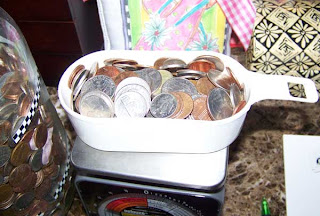 Not sure when we last counted the coins in the family coin jar... but it was time this week. The jar was full, nearly to the top, and was at risk of injuring someone or being tampered with. So I made it into a mini-experiment for Seth. 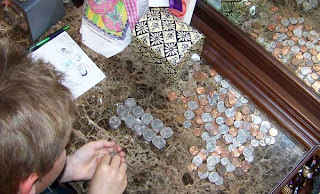 The approach was to weigh a sample of coins, count the amount of the sample, calculate the $ per pound, weigh all the coins, and multiply. So we scooped out a cup of coins and weighed it to be roughly 1.75 pounds. Subtracting out the weight of the scoop, we were left with 1.65 pounds. Then Seth counted those coins and it contained $18.97. That worked out to about $11.50 per pound. We dumped those coins back in the big jar. 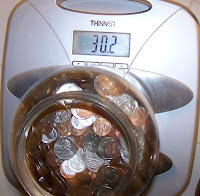 Next was the weighing of the big jar of coins on the family scale. It was a whopping 30.2 pounds. We dumped the coins into 2 pillow cases, then we weighed and subtracted out the empty jar, leaving a net of 27.7 pounds of coins. That's a lot of coins!

The next day, off to the bank the family went. They have a machine that counted all the coins, which amounted to $307.37! So the winners were: 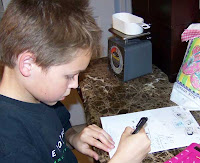 Update to this one: Having never seen the jar full of coins, but only seeing the empty jar, and hearing the story... My dad (aka Paw Paw) guessed $300. So, he defeated Math: