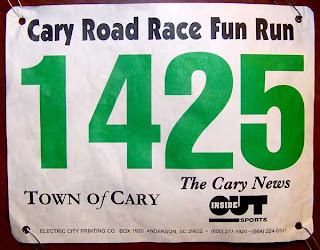 I made it. It wasn't really a "fun" run. Next time, I will enter the competitive race instead of the "recreational" one. Subtracting out the 30 seconds or so it took to get to the starting line, I crossed the finish line with a time of about 31 minutes 45 seconds.
After Thursday night's butt injury, I was pretty sure I would be able to, at best, walk this event. But I prepared as well as I could this morning. I was already taking a daily anti-inflammatory pill due to an injury from last summer that is still plaguing me. I added a hydrocodone (aka Vicodin) to that. I stretched for about an hour before the shotgun start, and ran a few slow sprints to test out the pain endurance. I prayed God would carry me where I wasn't able to.
I did feel a dull sense of pain throughout the race, especially going up the huge hill that dominated the first mile. However, I took it slow (as evidenced by the 10+ minute miles I "ran") and the pain was not too bad. In fact, by the time I was done, I felt well enough to come home and mow the lawn!
It was a great feeling to stand in the pack, waiting for the start with hundreds of others, most younger, smaller, and more fit than I am now. The sights and sounds of a simple local 5k road race brought back a lot of memories. The occasional cheers from observers. The erratic running of some people weaving in and out, jockeying for position. The water cups being offered near each mile marker, and resultant litter being run over by the pack or blown away by the wind. The undesired head winds and blazing sun. Even in a 72 degree morning, the direct sun was warm. Trying to coordinate the key, the ID, the music, and the stuff you pick up from the vendors, such as pamphlets for future races. The souvenir race shirt which more often than not does not fit well or has crappy artwork. It's all good, and I'm pleased that it's over... and I made it. Now... to schedule the next race...
Posted by Blain Dillard at 10:32 PM